This week I’m preseting an AFM topography image of BTBT-based crystals. These molecules are formed by a double benzilthiophene core, and have symmetric akyl chains to each side. After dissolution and deposition, the molecules were allowed to crystallized under a solvent atmosphere, using the so-called technique “Solvent Vapor Annealing”. The AFM image shows that the procedure allowed the formation of needle-shaped crystals, having lengths between 300 nm to 1 micron. 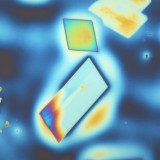